Our chief instructor is Sifu Fung Ying Hong (Melissa Chan), a martial artist with over 50 years of experience training and teaching Hap Gar and Hung Gar kung fu. She is supported by her senior students/ instructors, Mr David Chan and Mr Frank Szeto both who have been with the school since it's inception back in 2003.

About our System
Hap Gar kung fu is said to have originated in the fighting traditions of the Lama Monks of Tibet. The system relies on the waist to generate and deliver significant power to the striking limbs. The art emphasises agility, evasion and quick successive counter attacks with ferocious intensity and pin point accuracy. Owing to the dynamic and rapid flowing strikes of Hap Gar, considerable focus is given to developing deep rooted, yet quite moveable stances to allow for maximum efficiency of movement while maintaining complete control throughout. This is the point where the two styles converge.

While each of these styles is a complete fighting art on its own, we see each style as highly complimentary to the other. Quite simply, through diligent training, the successful combination of both styles offers more to the student than the sum of each part.

Practically, our training focuses on developing the links between physical conditioning, sparring and forms work. In addition, students are taught the cultural aspects that accompany learning a traditional Chinese martial art.

Lineage Information
Lineage is an important aspect in traditional Chinese martial arts. It helps to establish an understanding of where a particular art originated from, who the key teachers of the style were from days gone by and helps us to identify other students of the same lineage. In essence it is the kung fu schools family tree.

Lineage also enables the student to understand how a style developed over time by identifying key people that the art passed down through. 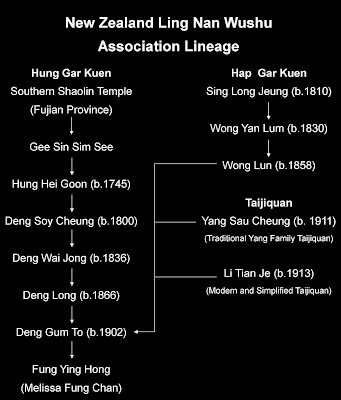 Reproduced with permission from www.risingcrane.co.uk 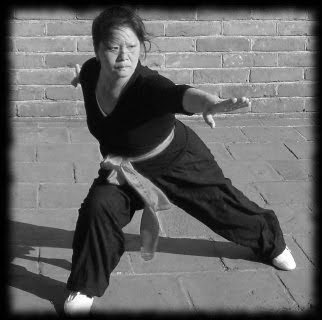 A traditional Wushu champion during the 1970s and early 1980s, she was the gold medalist in the Southern Fist category at the All China Traditional Martial Arts competition in 1980. In the years to follow she instructed classes for her teacher and qualified as a judge and trainer for the Guangdong Wushu Federation.

In 1983 Melissa Fung Chan emigrated from China to New Zealand where she now lives and teaches traditional Chinese martial arts.

Throughout the mid 1980’s she performed various demonstrations of Hung Gar and Hap Gar empty hand and weapons forms and this led to her being invited to teach senior students at the Chinese Martial Arts Association (est 1968), one of the oldest Chinese martial arts schools in New Zealand. She taught kung fu and tai chi at the school for many years. 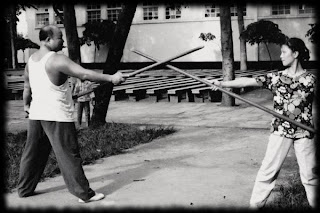 David Chan: - First started learning martial arts in 1989 at the Kempo School of Martial Arts north of Wellington. He trained for five years at this school before attending Victoria University where he cross trained with various people in different styles. In 1999 he returned to formal martial arts training in Ryūkyū kempo tomari-te and continued in this style for six years (Yudansha- 3rd Dan). In 2003 he met Sifu Fung and began his study of Hap Gar and Hung Gar kung fu and after five years of training with her, was accepted as Sifu Fung's first indoor disciple (入室弟子) in 2008.

Frank Szeto:- Trained in Kempo Bushido Ryu from 1988 to 1990 before joining Shi Mei Lin International Wushu Association. Was one of Madam Shi Mei Lins first generation students in New Zealand and studied directly under her for 13 years continuing to assist with classes to this day. From 2003 to present, Frank has been studying Chen Style Tai Chi Chuan under Sifu Terry Young and Hung Gar and Hap Gar under Sifu Fung. 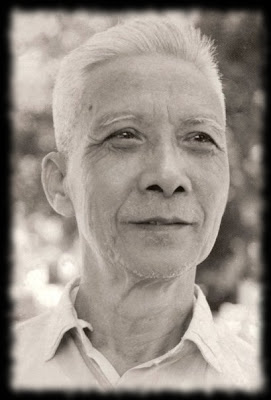 Sigong Deng Gum To was born in 1902 in Guangdong Provence, southern China and lived until the age of 85. He devoted much of his life’s work to the study and promotion of traditional southern fist kung fu. 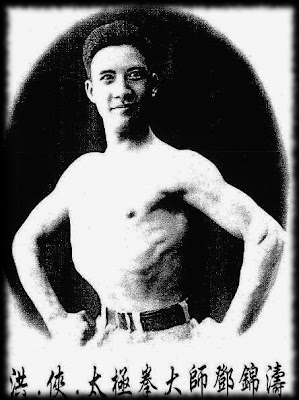 Deng Gum To taught kung fu in Guangzhou for many decades in the mid to late 1900's. He was a committee member for the Chinese Wushu Federation, Chairman for the Federation of Chinese martial arts in Guangzhou and Guangdong, selector and trainer of the Guangdong provincial team and a national wushu referee.